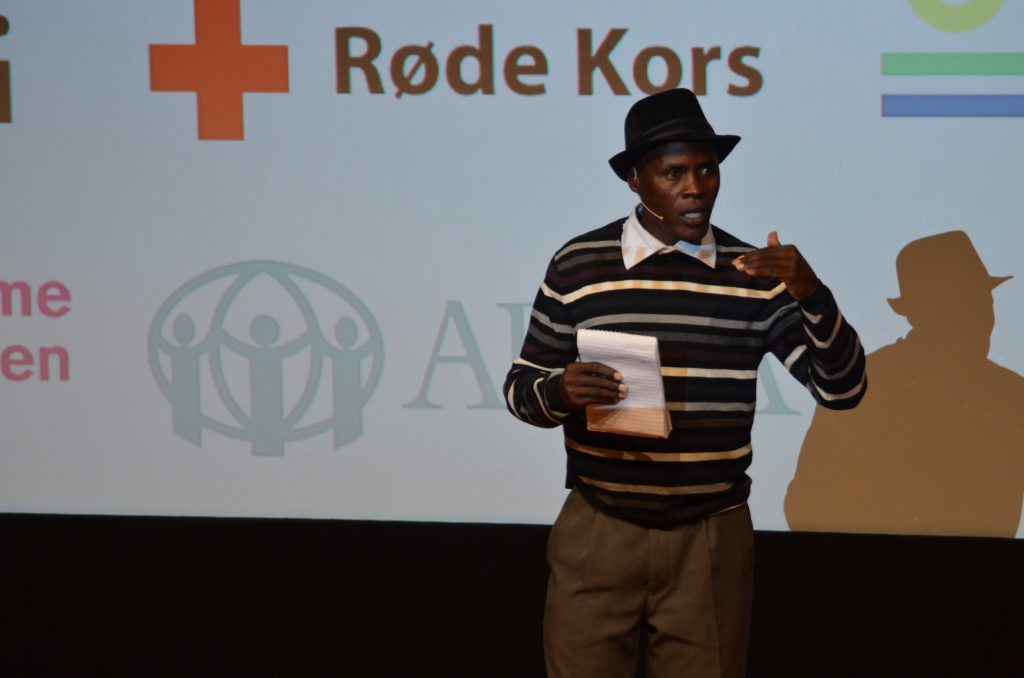 Do you know the different political parties’ development policy? To give you the answer, Digni helped arrange “The Great Development Debate” Tuesday evening at this year’s Arendal Days (Arendalsuka). The event is arranged annually in the southern Norwegian city of Arendal, and is an “important meeting place between leaders in politics and business, the media and people in Arendal and surrounding areas,” as stated on the event’s website. “The Great Development Debate” was arranged by 28 development NGOs’, including Normisjon, Mission Alliance, Himalpartner and Digni affiliated with Digni’s umbrella organization.

The first debate theme, “Climate and Food”, was introduced by Kenyan farmer Kisilu Musya, whose daily life is deeply affected by climate change. He is the main person in the documentary film “Thank You For The Rain”, which will have ten screenings in Norway in the coming weeks (http://thankyoufortherain.com/screenings). Kisilu delivers a strong message to us in the days leading up to this year’s parliamentary elections, that all of us need to be concerned about how the poorest in the world are particularly vulnerable to the effects of climate change.

Laila Baker, from United Nations Population Fund, introduced the second debate theme “Equality and Feminism” in development policy. She currently works in the nation of Jordan, and has witnessed how the country has fallen from being in the upper ranks of medium-income countries to landing in the lower ranks of this category. Baker believes that the deterioration in Jordan’s economic condition can be blamed on a number of factors, but that the problem truly rests in Jordan society’s systematic discrimination of women. She believes that this is also the case in Brazil.

“Norway is excellent at supporting the foundations of equality in society, through the social welfare systems of education and health. However, when these foundations are state-financed, new and more ambitious goals must be set to ensure women’s full participation in decision-making processes,” commented Baker during Tuesday’s debate.

The final theme of the debate was “Self Interest vs. Poverty Orientation”.

In order to participate in “The Great Development Debate”, each of Norway’s political parties needed to send its top leader, or at least someone high up in the political party. The Progress Party, the Liberal Party, and the Red Party were not able to send candidates and were thus not represented in the debate. The parties that did participate were represented by the following politicians:

We here at Digni are careful not to express our political recommendations, but we arranged “The Great Development Debate” so that political leaders could share their views on development and their party’s development policy. Though we’ve seen tremendous improvement in the global standard of living in recent years, there are 800 million people around the world who still live in extreme poverty. We hope that you will keep this number in mind when you stand in the voting booth on September 11th. If you couldn’t attend the debate in person, click on the link above, watch the debate yourself, listen to the views of the party leaders, and choose well on voting day!